Hey everybody and Happy Halloween!

I don’t know about you, but fall is my absolute favorite season. The weather cools down, colors change, and Halloween/Thanksgiving come around. Since it is officially Halloween, I wanted to share some of the fall fun that my friends and I have been having the past few weeks!

Every year the scholarship organization that I am in throws a big halloween party with costume contests, snacks, dancing, and pumpkin carving competitions! Each house goes out and gets a pumpkin, then gets to carve it together and present it in hopes of winning a prize! We decided that this year we wanted to get as many of the girls as we could and go to a real pumpkin patch so we could take pictures while there. Though we did have to deal with temperamental Florida weather that didn’t yet realize that it was fall, we dressed up in our long sleeves and drove out to find some pumpkins! We had a blast picking out pumpkins, going through the maze that was most certainly for kids, and taking lots of pictures! 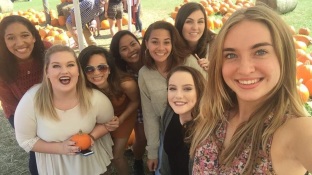 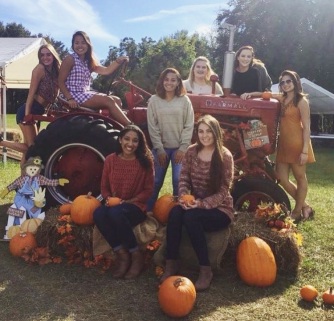 A little later in the week we had a mini pumpkin carving party with some of the other houses! A few of us had bought our own pumpkins as well, so there was plenty of carving to do! It was nice to put down the textbooks and relax outside for a little while and enjoy each other’s company! 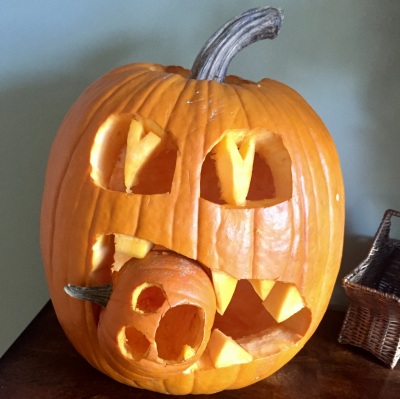 Above is a picture of our house pumpkin! Jessica, Jianellie, and Leah all helped put this masterpiece together, and it turned out really cool! 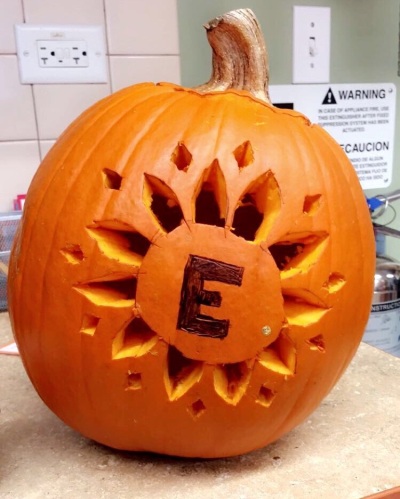 This is the pumpkin I carved! I looked through different ideas online and finally came across a sunflower pumpkin that was beautifully done. Mine of course is not as good as what was on Pinterest, but does anything ever? It wasn’t too complicated, but I think it was sweet and I am really proud of it!

It was then finally time for the Halloween party! It took me forever to figure out what I wanted to be, but I ended up doing a twist on a common one this year. A lot of people were doing deer costumes which were super cute, but I wanted to do something a little different. I ended up representing my love of puns by being “Oh DEER!” Some people got what I was going for immediately, some people had to have it explained to it, but almost everybody said that they liked my idea so I was pretty proud of it! 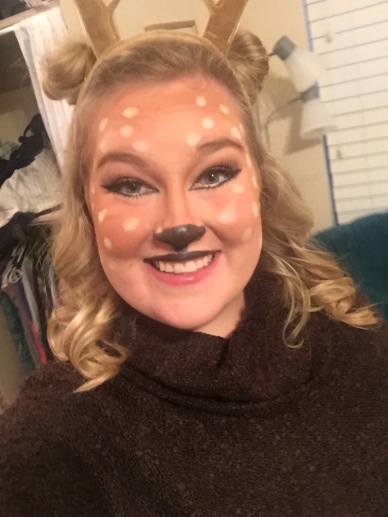 I love doing makeup so I enjoyed doing this makeup heavy costume! I just went really heavy on the bronzer on my cheekbones and my forehead, added some white face paint and eyeshadow for the spots, did a brown smokey eye, winged out my eyeliner in the inner and outer corners, then added a black nose/lip! I then put my hair in little buns for the ears, added my antlers, and my face/hair was complete!

I didn’t get a good picture of the back of the costume, but for my outfit I got a brown sweater and leggings from Walmart to use for the base. I then added some cotton balls in a pattern along the back to achieve the deer look, then made a tail with brown and white felt that only cost 20 cents or so. To the front of the sweater I added the foam “OH” on my stomach so the pun would come in! It turned out really well actually, and I had a lot of fun making it!

The party itself was a lot of fun! All the houses brought halloween themed snacks, there were pumpkin competitions, costume competitions, and lots of dancing! Our house pumpkin even ended up winning a prize and the house received a Walmart gift card! All the freshman in my house went as the cast of Monster’s Inc. which was so adorable! It was a fun night spent with friends that I won’t soon forget!

I hope that everyone has a safe and happy halloween! Go out there and enjoy some candy!

One thought on “Fall Festivities”